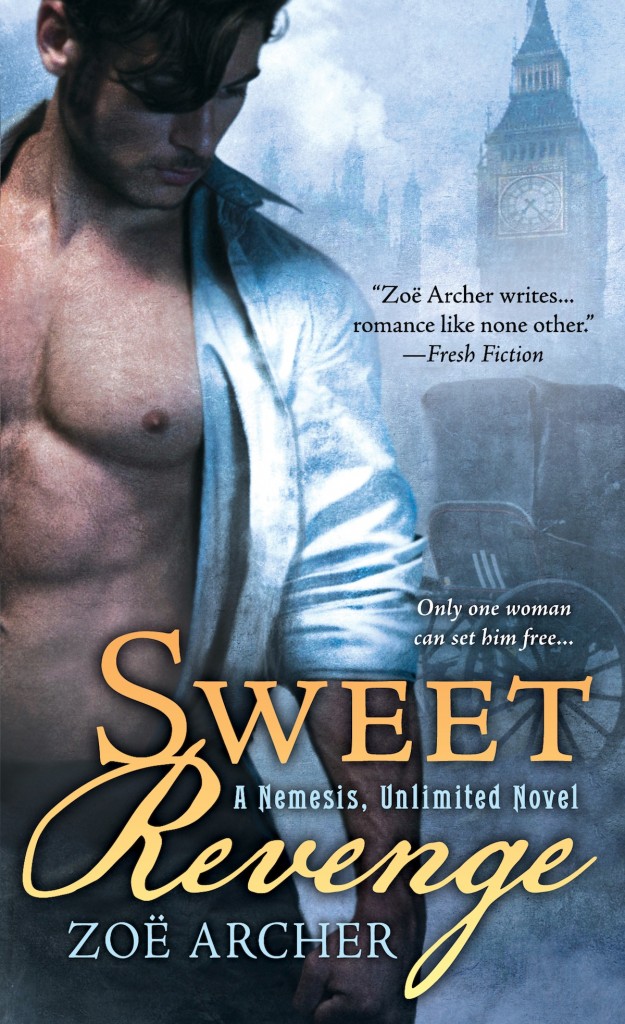 When Jack Dalton escapes from Dunmoor Prison, he has only one thing in mind–finding the nobleman who murdered his sister and making him pay. But when he reaches the inn where the Lord Rockley is rumored to be staying, three well-dressed strangers are there to meet him instead. And the pretty blonde is aiming a pistol right at his head …

Joining Nemesis, Unlimited has made Eva Warrick much more than the well-mannered lady she appears to be–one who can shoot, fight, and outsmart any man in the quest to right the injustices so often suffered by the innocent. She’s not afraid of the burly escaped convict, but she is startled by their shared attraction. She and her partners need Jack’s help to get to Rockley, but Eva finds she wants Jack for scandalous reasons all her own…

“Starred Review! This bold mix of an unlikely romance, a gritty setting, and a page-turning thriller will leave readers craving more.”—Publisher’s Weekly

“4 1/2 Stars! Top Pick! Revenge can be sweet, smart, sexy and make for a fast-paced, non-stop read when Archer’s the storyteller…To readers’ pleasure, she brings an amazing cast of characters, a strong plot and romance to the first in her Nemesis, Unlimited series.” — RT Book Reviews

“A sexy, action-packed romance with a to-die-for hero and a true love that will make you swoon.” —New York Times bestselling author Courtney Milan

Evangeline Warrick stared at the man at the other end of her Webley .450.  Though calling him a man seemed inapt.  The term brute had been coined to describe such a…male.

Dark eyes, wild as an animal’s, burned into her.  He took a step toward her.

“Easy, love.”  He spoke as though calming a startled horse.  “Not here to hurt you.”  He took another step closer.

Eva cocked her gun, her aim holding.  “Put up your hands, Mr. Dalton.  And do not take another step.”

His hands came up, and Dear God, were they big.  Just like the rest of him.

“I just want Rockley,” he said.  His accent was rough, his voice deep.

“You aren’t going to get him.”

Dalton raised a brow.  Or she thought he did.  In truth, grime coated the convict so thoroughly, she could barely make out the details of his face.  Mostly, she saw those eyes, keen and hard.  She had seen the gazes of desperate men before, men driven to the very edge, but none of them sent a thrill of caution down her spine the way Jack Dalton’s eyes did.

“Now he’s using women as bullies?”  His mouth curled into a sneer.  “Gun or no, you’d be wise to be careful around Rockley.  Better yet, put a bullet in his brain, not mine.”

“That isn’t how we work,” she answered.

“We,” answered Simon, stepping from the shadows in the corner.  Marco came forward as well.  Neither of them had their weapons out, though they were both armed.  They knew she could handle herself with a gun, and trusted her to keep Dalton reasonably controlled.  She knew precisely where to shoot a man to incapacitate him.

Dalton snarled, his gaze darting back and forth between Simon and Marco.  Then back to her.  “Where’s Rockley?”

“Not here,” she replied.

“Tell me where he is.”  Menace poured from Dalton in waves, and Eva wondered if she truly was going to use her revolver.  She didn’t want to.  Shooting a man could be loud and messy, and complicate things unnecessarily.

“That Lord Rockley was staying here,” Marco supplied.  “It’s what is known as baiting the trap.”

Dalton moved far more quickly than his size would suggest, and too quickly for even an experienced shot like Eva to fire.  One moment, he stood near the window, hands upraised.  The next, he had Marco on the floor, one hand around Marco’s throat.  Marco fought against him, but Dalton’s sheer size and brawn rendered Marco’s training almost useless.

Simon got himself behind Dalton and looped his arm around Dalton’s neck.  He grasped his wrist to capture Dalton in a headlock.

Stepping close, Eva placed the muzzle of her Webley against Dalton’s temple, making sure that, if she had to fire, she wouldn’t hit her colleagues.

“If you want your chance at vengeance,” she said, low and quick, “release Marco immediately.”

Slowly, Dalton’s hand uncurled from around Marco’s throat.  The only sound in the room came from Marco, dragging air back into his lungs and coughing.  Simon kept his arm tight around Dalton’s neck, slightly loosening the pressure so the convict would not asphyxiate.

“Go sit on the bed, Mr. Dalton,” Eva commanded.  “And I ought to warn you, this gun of mine has been complaining for weeks that it hasn’t had a drop of blood.  Do not give me a reason to satisfy its thirst.”

Dalton stared at her from the corner of his eye.  This close, she could see that his eyes were the color of darkest coffee, verging on black.  A feral intelligence shone in his gaze, like a wolf learning the ways of man in order to stalk and kill human prey.

He had enough astuteness to recognize that he had to comply.  He nodded tightly.

Simon released his hold on Dalton and stepped away.  With that peculiar savage grace of his, Dalton rose up.  Marco scrambled to his feet, rubbing at his throat and scowling.

Eva edged back, not wanting to be within striking distance of Dalton.  And his size made her distinctly uncomfortable.  She was not a small woman, nor especially delicate, but she knew with absolute clarity that Dalton could snap her into matchsticks.

He sent her a glare, then walked toward the bed.  As lightly as he moved, his boots still shook the floorboards.  She had heard that the boots of prisoners were especially heavy, weighing as much as fourteen pounds, as if trying to pin them to the ground.  Yet the sheer muscle mass of Dalton seemed to rattle the whole inn.  Did the governors of prisons realize that hard labor turned rough men into weapons?  Dalton’s arms appeared to be as thick and tough as coiled rope.

Approaching the canopied bed, he eyed it warily.

Teeth gritted, he did so.  Strange—he looked almost uncomfortable.  Eva had sat upon the bed earlier and felt its plush softness.  One could have a very good sleep there.  Or a very pleasant night with the right company.

Realization struck her.  For the past five years, Dalton knew only his crude bed in Dunmoor Prison.  At best, that meant a straw mattress on an iron-slatted frame, with coarse woolen blankets for warmth.  Such luxury of this feather mattress and fine-combed cotton bedclothes must feel alien to him, or worse, a taste of comfort he had not experienced in a long time—if ever.

She shook her head.  Dalton was a means to an end.  Likely he would crush the life out of her without a moment’s hesitation.  She could not afford to feel sympathy for him, or endow him with a sentiment he probably didn’t feel.

In his filthy and torn prison uniform, radiating animal energy, he presented a strange picture as he sat upon the rosewood bed, lacy fabric hanging from the canopy.  Everything looked impossibly fragile in comparison.

“Talk,” Dalton growled.  “Tell me who you lot are, and how you know my name.”

She almost smiled at this.  The gun was in her hands, and yet he had the boldness to issue a command.

“We know all about you,” she replied.