It’s been a trend over the last few years (a decade? more?) that Halloween has become a holiday targeted at adults as much as children.  Which means that adults now have a huge selection of ready-made costumes available for them at their local party store or pop-up Halloween shop.  And I don’t think it’s escaped anybody’s notice that the costumes for women have grown sexier and sexier every year.  It’s harder to find a “non-sexy” costume than one that shows some leg or cleavage or just about everything on a woman’s body.

It’s actually absurd, the lengths (or shorts) costume manufacturers will go to make something “sexy.” 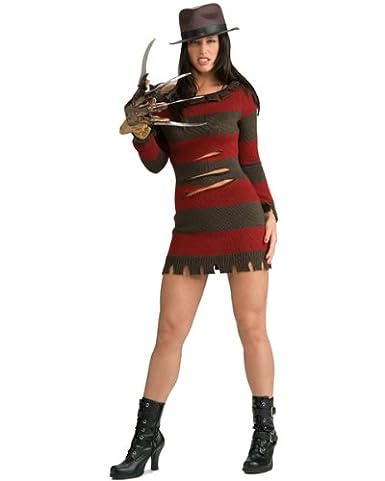 Since women’s Halloween costumes have grown more and more sexual, Halloween had been dubbed by many as “Slutoween.”  And I just can’t get on board with that.

I’ll be the first to acknowledge that women’s Halloween costumes have become extremely revealing, and the designers will find any profession, any object, any popular culture figure and find a way to make them “sexy.”  It’s verging on absurd.  But what I will not do, what I refuse to do, is ridicule or shame the women who decide to wear them.  We’ve developed a culture of “slut shaming,” where we heap insults and derogatory remarks on women who are sexual, enjoy their sexuality, or even just like to dress in sexy clothing, whether or not it’s Halloween.

It’s a woman’s absolute prerogative to dress however she wants, whenever she wants.  If Halloween is the time that she can feel free enough to wear sexy clothes, then, by God, that is her right.  Just as it’s her right to not be pawed, hooted at, or assaulted for wearing said costume.  I know that in the past, I’ve tweeted and posted images of sexy costumes and ridiculed them.  But what I wasn’t ridiculing were the women who opt to wear these costumes.  I simply find the “sexification” process to be absurd, so that beloved childhood characters or inanimate pieces of food become suddenly “sexy.”

So no, I don’t believe in “Slutoween.”  Let women wear the costumes they want to wear.  It’s their choice, and now of all times, we need to respect women’s choices.

I do have a problem with the sexualization of Halloween costumes for teenage girls.  To wit:

What concerns me about these costumes is that teen girls are feeling pressured to act or dress sexy before they themselves feel comfortable doing so.  The teen years can be confusing and uncomfortable, especially when it comes to figuring out your place within the gendered roles of our society.  It’s not wrong for a teenage girl to have sexual feelings or even act on them, but it’s not right if they feel pressured to behave a certain way before they are ready to.  Again—it’s a matter of choice.

What I really, truly cannot stand in Halloween costumes are costumes that utilize racial and cultural stereotypes.  That is offensive to me.

There’s simply no excuse for this kind of insensitivity.  Some might say, “Come on, it’s all in fun! I’m not racist! I don’t mean any harm by it!”  But every time a cultural or racial stereotype is perpetuated, it’s hurtful and cruel, and ignores centuries of oppression, marginalization, violence and prejudice.  I will never take issue with a woman who wants to dress sexily for Halloween, but I will always be offended if someone opts to wear a costume that mocks or stereotypes another race or culture.  That is inappropriate.

So this Halloween, wear what you want to wear, but remember to be sensitive toward others.  I wish everyone a safe, happy and fun Halloween!  Save me some candy!