For the past few years, it’s been popular amongst artists and cosplayers to “steampunk” their favorite films and comic books.  That means taking iconic characters and translating their costumes and gear through a steampunk lens. 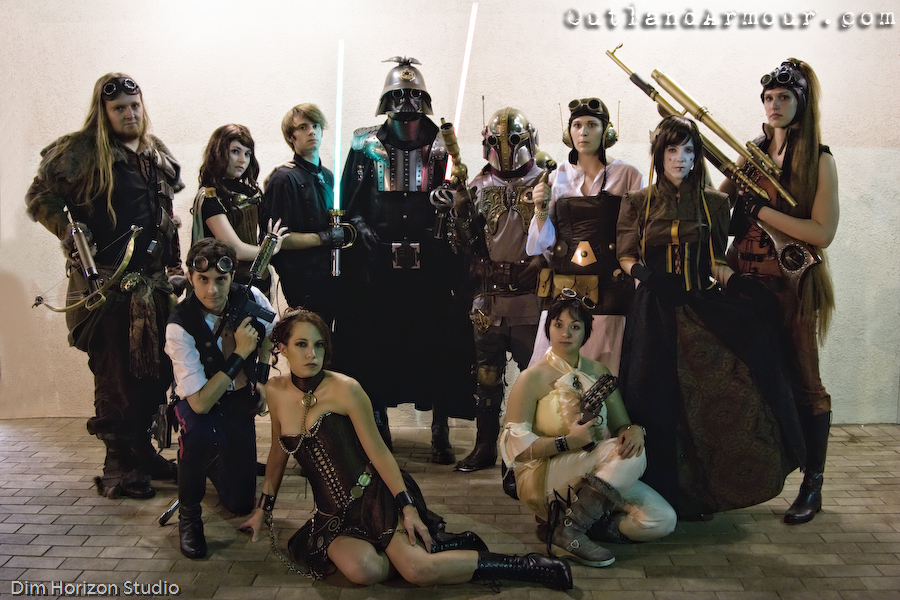 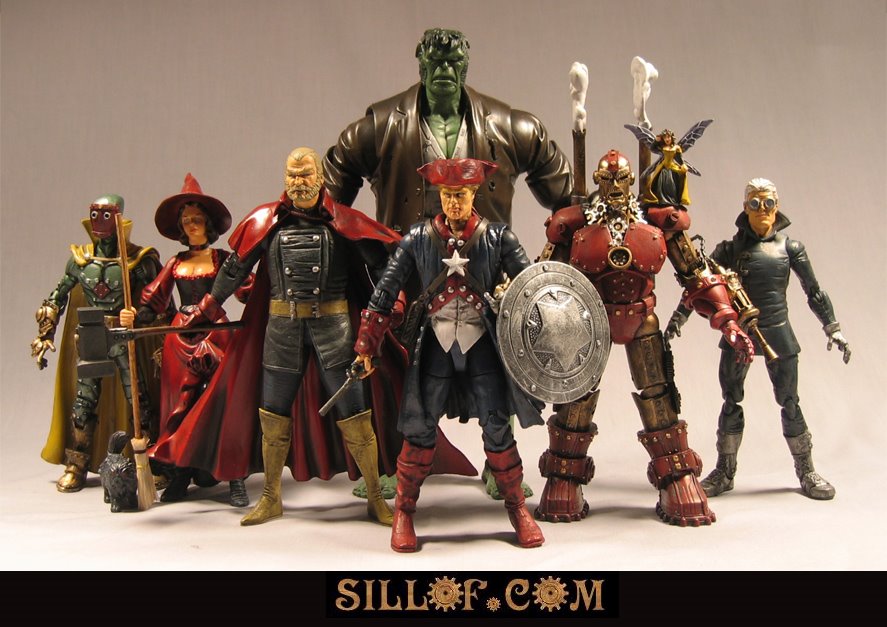 But what about if we broke out of the comic book/sci-fi film mold and steampunk’d some more…unusual combinations. Like:

So, what are your thoughts? What’s the weirdest steampunking you can think of?

Just a few weekends ago, I traveled to attend a staged play reading written by my father in law.  He lives in a small community about two and a half hours north of Los Angeles.  Nico and I travel up there on a semi-regular basis to visit his dad, and also to see some of the plays he’s been writing.  In the nearby town, there is an awesome independent bookstore that stocks my romances, and, a few years ago, graciously hosted me for a signing and reading of my non-romance literary fiction novel.

Thanks to the efforts of my FIL asking his friends to attend, the reading I’d held was extremely successful.  I met a lot of great people that day.  Recently, Amazon Encore picked up my novel as one of their October Kindle selections, so it’s only $2.99 for the month. Again, my FIL was very kind and let all his local friends know that the book was available for a discounted price.

So, flash forward a little bit, and here I am, walking into the auditorium where the staged reading is going to be held.  An older lady and her friend approach me to congratulate me about the novel being available on Amazon.  Then she confides, “All the friends I have who make money through digital books publish trash.  You know, like chick lit.”

Or romance, I mentally filled in.

My smile was strained as I replied that writing genre fiction is a very viable way to make a living, and, in fact, I write it, myself. Romance, specifically. She mumbled something, backpeddling, and then hastily retreated with her friend in tow.

These comments are so ubiquitous, it’s almost impossible to be angry whenever they pop up.  But it always shocks me when women are so quick to denigrate or dismiss fiction written by and for other women.  And I have to wonder if the people who are so judgmental about romance have ever actually read any, or do they base their assumptions on out-of-date cliches or what the dominant paradigm tells them is valuable.

How can anyone judge another on the basis of what they write, or what they read?  Unless what is being written or read is actively harmful, why would you consign someone’s work or pleasure to the “trash” bin?  Is it better to write fiction with unhappy endings?  Should we prefer tales of stolid morality to genres that provide escapism and happiness?  That argument played out in the 18th and 19th century.

Yay! It’s my very first guest on my blog—the awesome and talented Vanessa Kelly, here to talk about her latest release, His Mistletoe Bride!  Take it away, Vanessa…

Thanks so much for having me on your blog, Zoe!

A few weeks ago, Zoe visited my blog to talk about her newly released book, Lady X’s Cowboy.  She made the point that some of the best stories occur when two people from different backgrounds are thrown together and their very disparate worlds collide.  As Zoe said, one thing is for certain:  sparks will fly.  That’s especially true when a strong physical and emotional attraction is added into the mix.

In my new Regency-set historical romance, His Mistletoe Bride, my hero and heroine come from backgrounds so different that it’s a wonder they even speak the same language.  Lucas Stanton is a former army officer and a newly-titled earl, a gold-plated member of the British aristocracy.  He spent years fighting in the Napoleonic Wars and that experience, combined with his aristocratic background, shaped him into the man he is—tough and fairly uncompromising, with a strong devotion to duty and honor.

Phoebe Linville, my heroine, is an American Quaker who spent much of her life in a quiet town in the country.  She was raised to abhor violence, and to believe that man’s true nature is innately kind and generous.  Phoebe is the soul of compassion although she’s also got a temper—something she sees as an embarrassing fault—and is not one to suffer fools lightly.

After the death of her parents, Phoebe travels to England to meet her long-estranged grandfather, the Earl of Merritt.  Unfortunately, he dies before she can arrive, leaving her in the care of the new earl—Lucas Stanton.  Lucas made a deathbed promise to Phoebe’s grandfather that he would provide for her.  In the old earl’s opinion, the best way to accomplish that would be for Lucas to marry her.  Initially reluctant, Lucas is surprised to find that he actually likes Phoebe very much, and it doesn’t take long for him to realize that marriage might be just the ticket.

Phoebe, naturally, is horrified.  Lucas is a soldier and a sophisticated aristocrat, the furthest thing from a proper husband she can imagine.  Yes, he’s a gentleman and a man of honor, but Lucas wants to order his world like a military unit, and everyone and everything should fall into line.  Phoebe has no intention of just falling into line.

But there’s one big problem—she’s insanely attracted to Lucas, and she can’t seem to keep her wayward emotions under control.  And the fact that Lucas is hell-bent on seducing her means she has very little chance of guarding her heart.

But Phoebe is no shrinking violet, as Lucas soon discovers.  The obstacles between them are genuine, and it will require quite a lot of give and take to bring them together.  But that’s the fun of it, right?  Throw in a little holiday mistletoe and a whole lot of heat, and watch how these worlds collide.

What about you?  Do you enjoy “when worlds collide” stories?  What are some of your favorites?  I’ll be giving away a copy of His Mistletoe Bride to one person who comments.

BLAME IT ON THE MISTLETOE…

When Major Lucas Stanton inherited his earldom, he never dreamed his property would include the previous earl’s granddaughter. Phoebe Linville is a sparkling American beauty, yes, but with a talent for getting into trouble. Witness the compromising position that forced them into wedlock. Whisked away to Mistletoe Manor, his country estate, it isn’t long before she is challenging his rules—and surprising him in and out of bed…

Phoebe has no intention of bowing to Lucas’s stubbornness even though he offers all that she wants. His kisses and unexpected warmth are enticing, but Phoebe is determined to show the Earl of Merritt what real love is all about. And if that takes twelve nights of delicious seduction by a roaring fire, she’s more than willing to reveal her gifts very slowly…

Vanessa Kelly was named by Booklist, the review journal of the American Library Association, as one of the “New Stars of Historical Romance.”  Her Regency-set historical romances have been nominated for awards in a number of contests, and her second book, Sex and The Single Earl, won the prestigious Maggie Medallion for Best Historical Romance.  Vanessa also writes contemporary romance with her husband under the name of V.K. Sykes.  You can find her on the web at www.vanessakellyauthor.com or at www.vksykes.com.

The winner of WARRIOR is….

Thanks to everyone who gave me their romance recommendations.  I know my TBR pile is much bigger now!

Have a great weekend, everyone.

Woo!  Check out the SKIES OF STEEL page for an excerpt and links to buy.  And be sure to “Like” it on Amazon.  Mohawk wearing Man O’ War—hawt!

I often get requests for romance recommendations, so I thought the Friday before a holiday weekend would be a good time to list some of my favorite romance authors.

In no particular order:

Now I realize I’ve named just a few authors, and if I didn’t mention you, please don’t take offense! I have a lot of authors on my keeper shelves, but these are among my very favorites.

Leave a comment with your recommended authors, and you could win an autographed copy of WARRIOR!  I’ll pick a winner by Wednesday, October 10.

I think most authors/readers can relate to this. 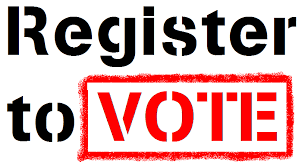 Make sure that you’re registered to vote!  If you’ve moved, if you have an absentee ballot or if you’ll turn 18 by Election Day, you need to register. Also, there’s a ton of really fraudulent practices going on right now where voters who should be registered are mysteriously getting dropped, so even if you’re certain you’ve registered, double check!

Seriously, folks, this election is critical. Not just the presidential election, but initiatives, propositions, Congress and the Senate.  Everyone needs to vote, but it’s vitally important that women have a say in their reproductive freedom.  I can’t say it enough: VOTE!

I can’t take it anymore.

For the love of dog, please, Charmin, spare us the family of bears that’s obsessed with their bowel movements. 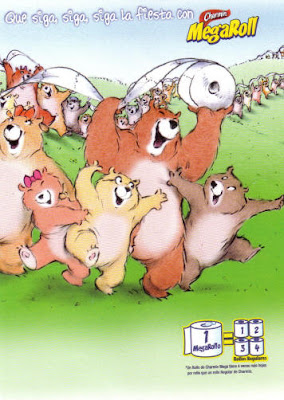 Or how they continually monitor each others’ butts for clinging bits of toilet paper.

I would never go to their house for dinner, that’s for damned sure.

Might I suggest the following individual as toilet paper spokesman?